A study in texture and light, the Casper’s House project by New Zealand design studio Dessein Parke gives new meaning to a house with a view. Maddy Matheson writes.

Unconventional, quirky, and delightful describe the Casper’s House project, a house that overlooks the beach in the sleepy town of Tairua, in the Coromandel on the east coast of New Zealand’s north island. Interior designer Natalie Parke, of Auckland-based studio Dessein Parke, and her husband left all design preconceptions at the door, and embraced the unknown in this project, seeking something that amalgamated and satiated their taste for a space rich with colour and texture. Without prescriptive restraints, Parke engaged several trusted colleagues, such as Dominic Glamuzina of Glazumina Architects, to bring this experiment to life.

The Casper’s House project is a study in colour, texture, and light, with an unconventional take on each. The structure of the house was inspired by an A-frame and features a steeped roof and a large, floor-to-ceiling window at the front overlooking the beach. Light pours into the space, not only from the large front-facing window, but from the skylights and windows dotted throughout. The angles and colours of the light change beautifully throughout the day based on the position of the sun.

One thing was crystal clear to Parke from the start: with so much available light, the interiors would be one colour, and that colour wouldn’t be white. The deep, rich blue she settled on envelops the interior of the home, creates a calming, desensitising effect, offsetting the scale of the ceiling and brightness of the light as it seeps in from different angles. The inspiration for this rich blue comes from a piece of art within the home, a large painting by Parke’s father that hangs on the wall overlooking the dining space. She explains: “Colour is so effective because it is so visceral, so you don’t even realise you are reacting to it sometimes.”

Texture was highly considered in this project as well, adding interest and intrigue throughout the home. Different textures have been used to delineate the space, such as the oriented strand board saturated in the same hue of deep blue that is used on the partition between the kitchen and dining space, as well as on the wraparound bench and bookshelf on the opposing wall. The richness of the repeated colour on different surfaces allows texture to come into play in an impactful way within this project.

You can’t ignore the external façade of Casper’s House that has been so aptly named, it has an eery and ghost-like ability to absorb and emanate light.

When looking up the hill at the home it has a presence – a large lavender structure juts out among the green leafy backdrop. But peering out from the deck, the house can blend seamlessly into the horizon on a clear evening. The fibreglass cladding can absorb and reflect even the most luminous colours of a sunset. This effect is once again a nod to the ingenuity of the choice of colour and materials used.

Parke’s limited and considered choice of art in the home was a conscious one. Crowding the walls would take away from the effective use of colour and texture which work together so harmoniously. Hence it was important to scale back on decor to allow the elements of the home to sing. A photograph in the living room by New Zealand artist Tammy Williams and a painting of a skull by Parke’s husband, artist Gerry Parke, greet you on your way in through the house and guide you up the stairs, almost as if to say: “this way.”

In the bunk room, the walls are coated in a plush plum colour, one of the only other standout colours in the interior of the home. A salon hang of tapestry works featuring horses and farm scenes scales the wall vertically, emphasising the height of the room as the eye trails from the top of the works, up the staircase to the top bunk.

The windowsills, both in the bathroom and looking out from the kitchen, have been painted in a vibrant yellow, adding the final pop of colour in the home. The framing of the landscape beyond, captured perfectly in each yellow frame, adds the last few pieces of art to the home’s collection.

After our conversation about the project, Parke’s final thoughts still ring in my ears. She expresses the importance of being authentic when choosing your interiors. Trends come and go but being bold, being brave and doing something so uniquely different pays off every time. The Casper’s House is testament to this.

Featured Image: A painting of a skull by Gerry Parke guides you up the stairs. Courtesy: Dessein Parke. 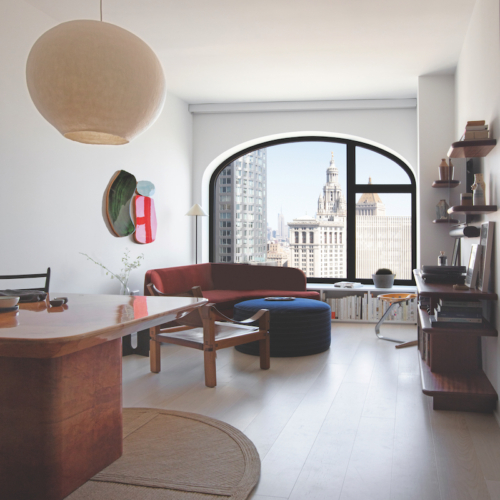