Preserving the historical significance of this Sydney site with dignity, YSG Studio has employed the beauty of art and design to transform a Victorian corner shop into a contemporary home. Erin Irwin writes. Turning a historical house into a contemporary home is no easy task. It is often the case that pragmatic changes and extensions to the layout over time leave behind an unliveable warren of rooms. Nevertheless, there is something magical about a building with palpable history in its walls. When dealt with in a creative but sensitive manner, buildings such as these can transform into uniquely spectacular homes.

In the case of this home, formally the old Balmain Supply Store, the team at Sydney’s YSG Studio had their work cut out for them. Despite the Balmain business having closed its doors long ago, the Victorian Georgian building retained its traditional glass shop front, alongside architectural treasures including the original steel-framed entry screen and stained-glass windows sprinkled throughout the home. However, the interior was not necessarily suited to residential purposes, a dilemma not aided by a particularly grim renovation perpetrated in the 1990s which left the structure feeling distinctly office-like.

After three years and a complete overhaul of almost the entire building – including the relocation of several bathrooms, as well as dealing with the hard work of a previous tenant who was exceptionally committed to plastering over every surface – the rebirth of the Balmain Supply Store is now complete.

Designed for a family of four and a large dog, the space is remarkably open and airy for a heritage home. By exposing the sandstone bones of the structure and removing several interior walls, the house has been utterly transformed. YSG Studio intentionally avoided dark coloured materials and finishes to draw light into every room, preferring travertine and poplar burl wood over the traditional Victorian mahogany that would have once featured in the residence. They also utilised clever design features to ensure that multi-purpose rooms retained clearly defined areas without compromising their open plan feel, such as carefully placing the kitchen island bench along the length of the entryway to act as a welcoming corridor without enclosing the space.

This approach to the home’s interior design extended to their selection of art. While the homeowners had a few select pieces in their collection already, YSG Studio aided them in acquiring majority of the works now present, precisely curated to compliment their design vision. Paul Rousso’s The Colors of Sound adroitly accentuates their desire to create a home where light and air floods the various rooms, physically embodying a breeze flowing through the salon from the courtyard. The striking colour of the piece animates the soft folds of the hand-sculpted acrylic, the work seeming to move as one walks around the room. As an unmistakably contemporary piece, Rousso’s work embodies the harmony between old and new that is found within the home.

This motif is brought out in several other pieces, including Girl in Yellow by Clara Adolphs. The work’s simple palette emphasises the textural quality of Adolphs’ paint application, which echoes the sandstone it is hung upon. Similarly, Amanda Marburg’s Goddess found in the living area sits in joyful conversation with the poplar burl veneer used throughout the kitchen, her organic lines echoing the textured walls.

However, the team at YSG Studio do not limit themselves to merely art that hangs on walls, having personally designed several highly-sculptural elements for the project. “Overall, there’s a very fuzzy line between the art and furnishings”, says Yasmine Ghoniem, director of YSG Studio.

“As is often the case, we couldn’t ever find what we were looking for, so we created unique pieces instead.” This includes the outstanding custom timber chandelier above the dining room, a halo of Australian red cedar with carved poplar burl cups. Strategically placed to be admired from all angles, including from above as one descends the stairs, it is an artwork in itself.

The metamorphosis of the Balmain Supply Store from Victorian shop into stunning modern home is achieved through the skilful deployment of tactile finishes and luxurious textures. Here, YSG Studio has ensured that the art works harmoniously with design to speak to the historical heart of the home while remaining unquestionably contemporary, creating an atmosphere of airy luxury within bright sandstone walls. 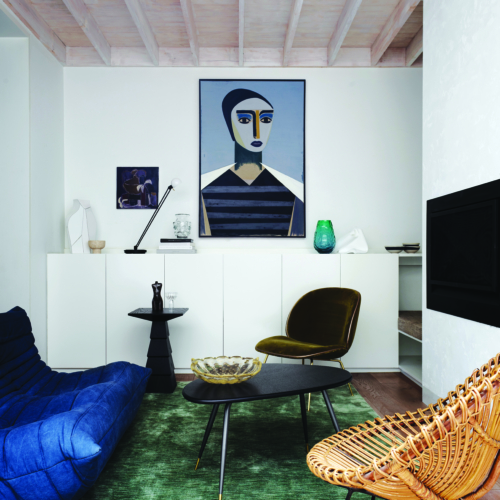 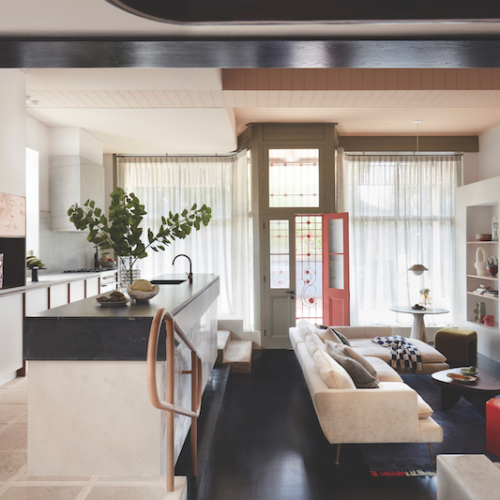 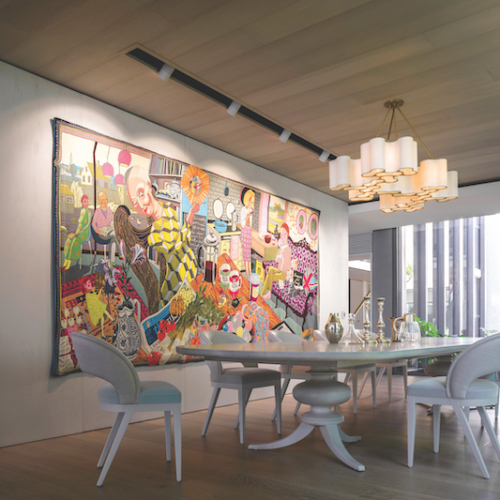