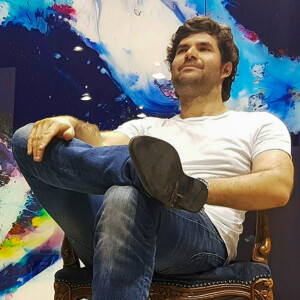 By fusing painting and light, Tommy’s practice bridges art and science, opening a portal to another dimension. “My art is more of a question, rather than an answer; it celebrates that moment of creation, connecting us to a field of consciousness that we are all part of.”

Tommy’s practice also reminds us that art doesn’t just have to hang in a frame on a wall. In collaboration with fellow creative Gaby Gaha, Tommy has created a number of ambitious projects for architectural spaces and galleries, including the 12-metre-long VOYAGE, a landmark presentation that was featured on ABC National News. His custom-made ENIGMA painting, which was unveiled at The Other Art Fair in Sydney in March, is now on public display in the Citywest Carpark in Canberra.

Graduating from the School of Art with honours at the Australian National University in Canberra, Tommy has propelled himself into the international scene through a residency with founders of VIVID in Germany and commissions in China. He is currently working with top Australian architects Turco and Associates. As Dave Caffery, founder of Canberra’s Art, Not Apart Festival, says: “Tommy’s work is sublime, properly speaking. He is evolving into a truly great artist.” Watch this space!