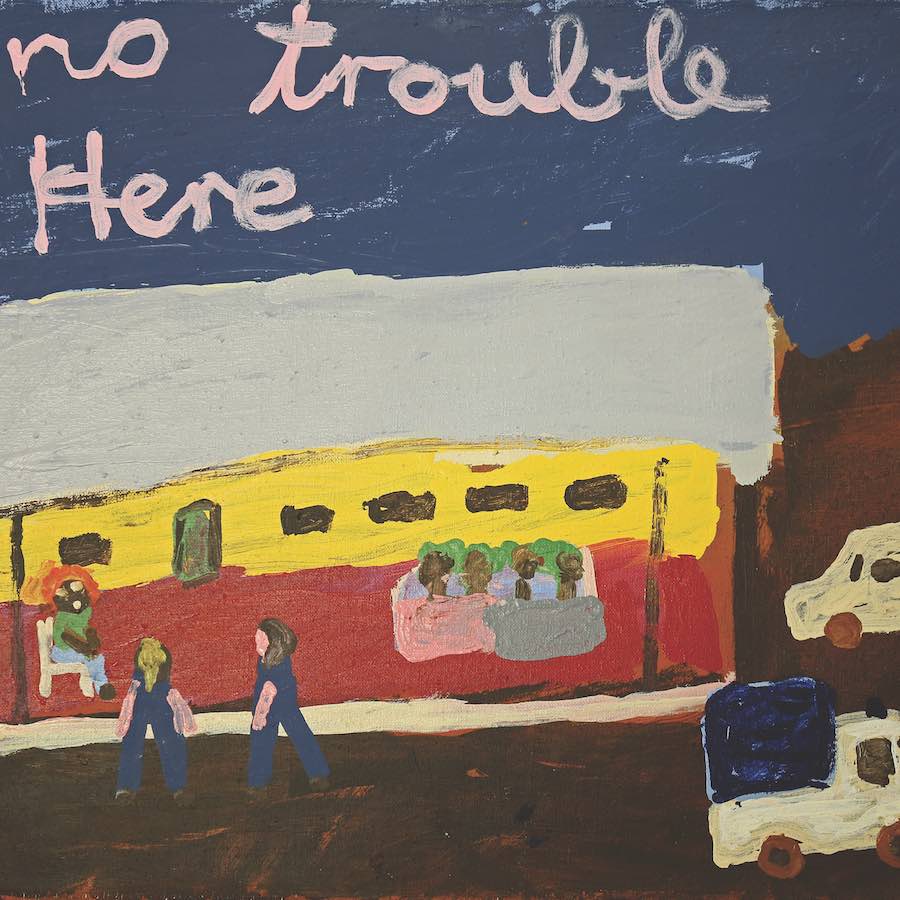 WHAT IS MOST DISTINCTIVE about the paintings of Sally M. Nangala Mulda is that they tell us just how it is to live in Abbott’s Town Camp, not far from the mostly dry Todd River bed in Alice Springs (Mparntwe). Many of the paintings produced by Indigenous artists working out of the region use colour and pattern to evoke the romance of their connections to Country. However, Sally’s approach delivers the gritty reality of the place in which she lives, the interactions between police and Aboriginal people, the supermarket as the source of “a feed”, the tension around alcohol consumption and people sleeping rough, all set amongst saltbush, waterholes, homes and shops.

More than 2,000 people now live in the Town Camps around Mparntwe. They have become more crowded in the years since the 2007 Northern Territory National Emergency Response (a package of changes to welfare provision, law enforcement, land tenure and other measures introduced by the Australian federal government under John Howard). And with so many different groups in proximity and around 20 languages spoken, living conditions can be difficult.

Sally was born in 1957, south of Mparntwe, in a community known as Titjikala. She had problems with her sight and lost the use of her left arm after an accident, both of which impacted the stability of her early life. Sally began painting when she lived out bush, but it was when she moved to Alice Springs and began working with the Art Centre Tangentyere Artists that she began to find her way. In the beginning she found it difficult. Sally says, “I heard a couple of ladies say, ‘We can’t draw ourselves. We don’t know how to draw it’. So we learned.” Surgery on her vision has assisted her transition to an inimical style and stories that Sally has exhibited consistently since 2008.

Sally tells me that her paintings are about “everyday life for Aboriginal people in Alice Springs, people living in Town Camps, people visiting from the bush who might stop at Town Camps or sleep in the creek”. She uses bright and painterly imagery paired with cursive script that describes the subject, attracting increasing attention. In 2019, Sally’s work is in the prestigious The National 2019: New Australian Art exhibition at the Art Gallery of New South Wales in Sydney. She is a finalist in the National Aboriginal and Torres Strait Islander Art Awards in 2019 (also 2018 and 2012), and the 2019 Sulman Prize (at the Art Gallery of New South Wales). She will also be featured in Adelaide’s TARNANTHI: Festival of Contemporary Aboriginal and Torres Strait Islander Art in October. Sally is having her second solo exhibition at Brisbane’s Edwina Corlette Gallery, Town Camp Stories, in June after a sell-out first show in April 2018. Corlette, who first saw Sally painting in Mparntwe, describes the work as “Heaven. I love the naivety and the narrative”.

In the catalogue for The National, emerging Arrente writer Terazita Turner-Young suggests that Sally “doesn’t mince her words; she is brutally honest about the presence of police, alcohol consumption, and people sleeping outside because they don’t have enough money to pay for a power card to connect electricity to their homes.

She contrasts this with text about people doing everyday activities like shopping, sleeping and cooking food, indicating just how ingrained and normal confronting situations such as a constant police presence are in her world… These are her true stories.

That these paintings disarm us with their charm does not mute the power of their communicative realities. Sally’s work is held in the Utrecht Museum of Contemporary Aboriginal Art, The University of Queensland’s Anthropology Museum, the Araluen Art and Cultural Precinct Collection and significant private collections throughout Australia.