THE WORK OF LUCAS GROGAN MAY SEEM QUICK WITTED, FLIPPANT AND OFF THE CUFF, BUT THESE BLUE BEAUTIES HAVE BEEN A LIFETIME IN THE MAKING. ROSE OF SHARON LEAKE CHATS TO THE ARTIST ABOUT NEW HORIZONS. PHOTOGRAPHY BY CLARE HODGKINS. Lucas Grogan is more of a listener than a talker.

When the news runs, he listens. When people talk to him, he listens. When people talk to other people in what they think is a private conversation, he listens in. It is these conversations in particular, he tells me, that interest him the most and which in some way or another find themselves immortalised in his work. Text has become a crucial part of Lucas’ practice over his two decades as an artist. As has the colour blue – but he wouldn’t want me to go into that.

From afar Lucas comes off as a wild party boy; a prolific artist whose work is large, facetious and a little ad lib. But looks, as they say, are deceiving. Earlier this year Maitland Regional Art Gallery held Long Story Short, a mini-survey of his career as a mural and textile artist and the first presentation of his work in his hometown of Maitland, NSW. He described the show as a Local-Boy-Comes-Good story: “When you grow up and everyone tells you you’re nothing and you can’t do anything right, you always wanna prove them wrong.”

And that’s exactly what he’s done. The three large-scale immersive wall installations were created with painstaking detail throughout the duration of the exhibition install, and the embroidery and quilt works took upwards of a year to complete. But the apparent off the cuff content of the work was the longest in the making: a lifetime of listening. “All of my process journals are exclusively text,” he says. “I know it looks flippant and off the cuff, but I really study and try and make the right sentence speak to everyone.” He admits that the hardest part of his work is trying to say the most with the least amount of words. One liners such as “You are capable of anything which is worrying” and “The cool part about being alive today is that we get to see how it ends” are not supposed to teach, but rather offer reprieve. Reprieve from what? Lucas doesn’t elaborate, but “Art,” he says, “is about reprieve. Don’t try and say who’s good and who’s bad.”

Lucas’ signature textile practice was born out of necessity. And a detestation of paint. “I fucking hate paint, it’s shit,” he tells me. “So I introduced textiles into paint. Initially it was a way to make large-scale works while working two jobs. I could make tiny little patches on the tram or train. The reem of fabric that I first bought cost me five or 10 bucks. So that’s what I did.”

Now represented by three commercial galleries – Hugo Michell Gallery in Adelaide, Martin Browne Contemporary in Sydney and Yavuz Gallery in Singapore – and having travelled internationally with his work, Lucas manages to steer away from the allure of grandeur and maintain the witty sarcasm we have grown to love. 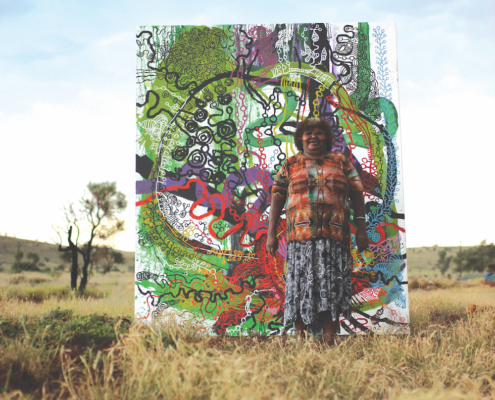 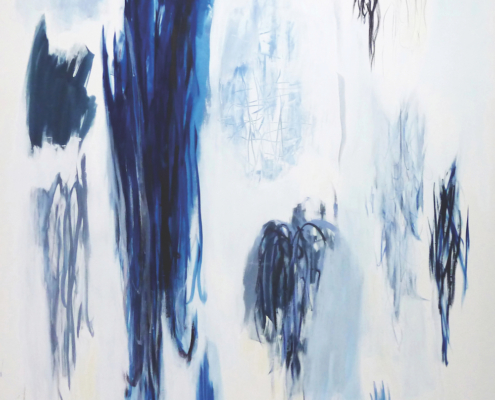 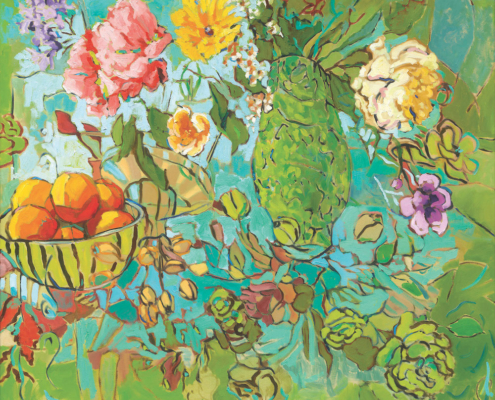 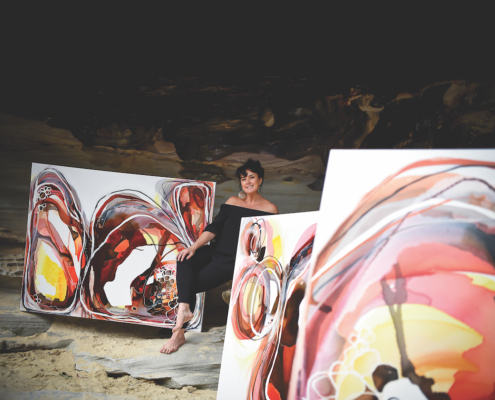