Balmoral’s Villa Carlo is a nod to Italian modernism, suffused with the distinctly contemporary flair of Daniel Boddam Studio and home to an impressive collection of Australian art. Charlotte Middleton writes. 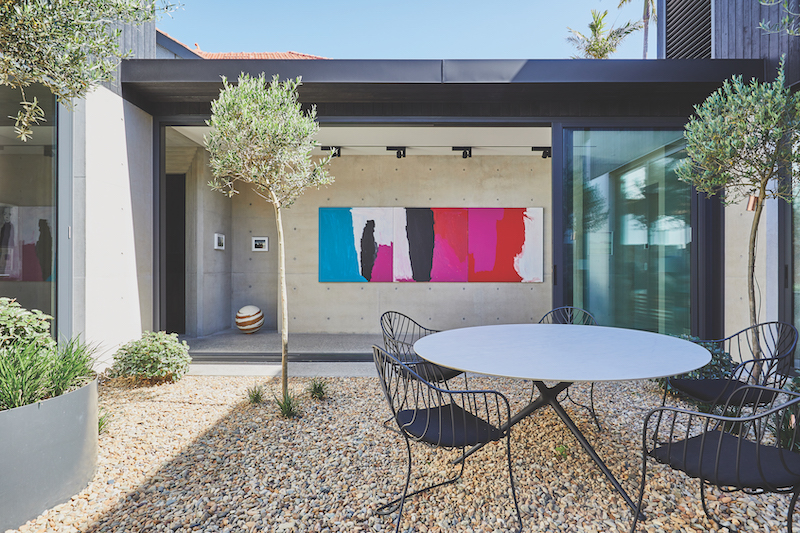 Aesthetes have long been drawn to the harbourside location of the Sydney suburb Balmoral. With its gentle waters, sprawling fig trees, and picturesque promontory, it isn’t difficult to see why the area has so frequently attracted artistic interpretation, and was even home to an artists’ camp in the late 1800s. It is fitting then that a pair of semi-retired, Australian arts patrons with a prestigious art collection of their own should choose the iconic locality to downsize to.

The couple enlisted the skill and artistic sensibility of architect Daniel Boddam to create Villa Carlo – a contemporary interpretation of the Californian bungalow and a paragon of holistic design. Comprising two wings separated by a central courtyard, the home is peppered with world-class art by Australian artists, enjoying sweeping ocean views from its eastern sides.

Villa Carlo exudes a sense of permanence with a base podium of stone, ground floor layer of rendered brick with in-situ concrete walls, topped with an upper floor in charred cambia ash. Any potential for the understated brutalist aesthetic to come across as heavy, however, is artfully offset. “You’ve got this sort of sombre, calm ambience,” Boddam explains, “but then you’ve got the injection of the art, and also the poetics of natural light as it meanders across the site throughout the day, transforming the architecture into a living sculpture.”

An admirer of the design logic of the early modernists, Boddam named the house for Carlo Scarpa, a mid-20th century Italian architect. “A sense of Italian modernism has been instilled within the home through the material sensibility of woodwork, stone, and brass,” he says. It was Scarpa’s work that inspired the faceted edges that recur throughout the house, nowhere more impactfully than at the front entrance.

The indented design of the magnificent custom brass door handle would be captivating as a stand-alone feature, but when played out on a larger scale in the concrete bordering the entranceway, it adds a thrilling sense of drama. “The macro is in the micro,” says Boddam.

Stepping inside the monumental front door, the lobby is flanked by a pair of artworks by Tomislav Nikolic on one side, and a playful Jenny Watson painting on the other.

“When designing the home, we wanted to create multiple visual opportunities,” Boddam explains. As such, the central concrete stairwell serves as a vertical gallery, and the eye is immediately drawn to an arresting monochromatic photographic work by Michael Cook.

Pivot to the left and a vibrant Sally Gabori triptych and intriguing ball sculpture by Marion Borgelt beckon down a long accessway opening out to the sun-drenched courtyard. “The home really enables you to get lost in the different artwork, which are rich and varied,” says Boddam. Amidst the gallery-worthy array, his personal favourite is a commission by Jamie North: “He reinterpreted the architecture in sculptural form – a black concrete totem embedded within the garden.”

Geometric patterning down the sides of the kitchen bench and in bathroom joinery continue to add dimension and elegance throughout the house, but otherwise, Boddam’s approach is one of considered simplicity. Focus is drawn not only to the art, but also artisanal interior elements, created by the legion of skilled craftspeople that Boddam routinely works with.

The interior decorating was executed by Cameron Kimber, who refurbished some of the client’s existing furnishings as well as introducing new pieces. Upstairs, the particularly memorable powder room features a striking blue grass cloth wallpaper, complemented by a budgerigar photograph by Leila Jeffreys. Bedrooms and living rooms consist of a thoughtful curation of varying textures and unfussy forms, punctuated by the architect’s luxurious brass flourishes. 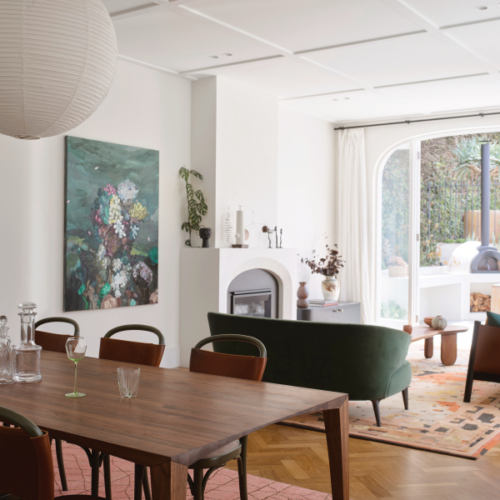 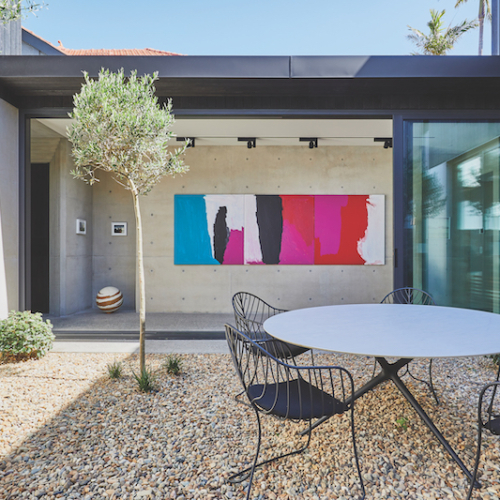