Living with Art: A Fairy-tale twist

In the Munich home of Kristina (Mia) Maria Martin, art, design and history combine with a fairy-tale ending. And the best part? It’s round. Rose of Sharon Leake writes. For creative director and entrepreneur Kristina (Mia) Maria Martin, the decision to buy a run-down, circular apartment in Munich, Germany happened in a matter of seconds. “I found the apartment online, probably ten seconds after the advert went live,” she tells me. “I fell in love with the special shape and history of the house.”

Born in Allgäu, a mountainous region in Bavaria, southern Germany, Martin has always had an affinity for art and design. Allgäu is known for its castles – the 19th century Neuschwanstein Castle and the Hohenschwangau Castle are reminiscent of something out of a fairy-tale storybook – and while Martin’s Munich apartment is somewhat smaller is scale, she has made it her own castle in the clouds.

The peculiar-shaped Bauhaus inspired apartment was the former home of an architect in the 1970s and up until Martin bought it in 2019, had not had much love. After a six month renovation, Martin had completely transformed it, reworking the interior layout to divide up the large living room space. While Martin changed her mind many times throughout the renovation period and is happy with how the space looks and feels now, she admits that her love for interior design means she will never think of the apartment as truly finished. Martin and her partner Fabian (along with their three dogs Vincent, Leni and Josef) are currently renovating their outdoor terrace which is the same size as the apartment, replacing its 1970s concrete floors with a rooftop garden. “I’m incredibly thankful for our rooftop terrace and the huge shared garden, which are really hard to find in an expensive city like Munich,” she says. “It makes the place our little paradise and we mostly live (sometimes even sleep) outside during summer.”

Throughout the design process, Martin constantly referred back to the building’s history, highlighting its odd shape and imbuing the space with 1970s glam and borrowing elements from 1980s Memphis and Post-Modernist design principals. “I love playing with colour, materials, shapes and graphic patterns,” she says, “and I always try to find the right balance between calm and boldness.”

As an avid collector of art and design pieces, Martin tells me the round layout was a welcome challenge and resulted in a unique and highly-specific interior fit out.

“The round layout of the apartment was definitely the biggest challenge of the design process,” she says. “We were used to living in square shaped homes, so we struggled a lot with giving the rooms a structure that made sense. It was a lot of trial and error – just imagine playing Tetris on giant slices of pizza. Besides this, we could only place custom-made furniture on the round outer walls of our home, so I designed them all myself. Most of my artworks and collectible objects are commissioned pieces, too, that I planned together with the artists to make sure they match the requirements of the place.” Each of these commissioned pieces means that Martin’s apartment is a space truly of her own design.

Of her art collecting journey, Martin tells me she relies heavily on Instagram, noting its ability to connect artists and design enthusiast from around the world.

“My favourite artist is Mike Klar from Berlin – he is currently working on my fourth painting and has become a very close friend over time. He’s not only a talented artist but also an interior designer so he has a great eye for curating art and colour in an interior.” A previous Klar work commissioned by Martin was a painting of a flower. As all the street names in Martin’s neighbourhood are named after flowers, this commission had a lot of meaning for her, as does each and every painting in her apartment.
“My most favourite pieces include the portrait of my dogs Leni and Vincent in wonderland, by Klar, the lamp above my dining table by Leonard Bessemer for his label Objectsforobjects which he presented at the collectible fair in Brussels and the pop art inspired Lips wall sculpture by Sascha Grewe under their alias artcanbreakyourheart.”

Martin is already making plans for future pieces, including a new Memphis inspired dining table with the German designer Grewe, the Salvador chair by Nelson de Araújo, the Tahiti lamp by Ettore Sottsass for Memphis Milano and the DS-707 armchair by Philippe Malouin for DeSede.

Ever expanding, the art and design pieces in Martin’s home have been carefully considered and hold personal meaning for her and Fabian; they are documents of their life.

“When we first bought the apartment, I knew it was a rough diamond,” says Martin, “and I’ve enjoyed every aspect of making it our home.” 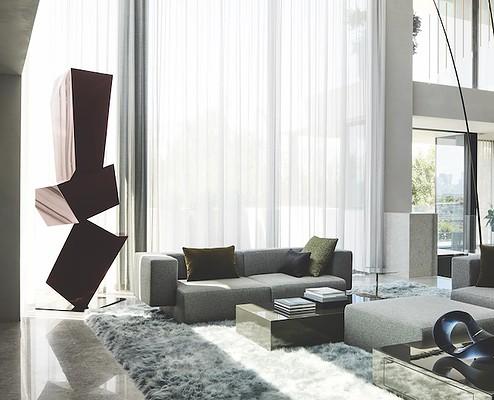 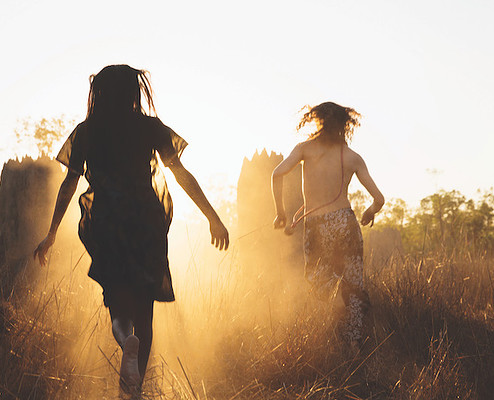