Franky Howell studied Fine Art at Leicester Polytechnic England in the early 80’s and more recently a Diploma in Illustration NMIT 2008. After several years travelling, he settled in Melbourne, exploring geometric patterns and three-dimensional forms, using paper and wood. Regularly exhibiting in shows in Melbourne since 2007, Howell has been a finalist in several national art prizes, Painting and Works on Paper in the last 10years. Howell’s works are in private collections in Melbourne, Sydney, Perth and London.

“These new flashe paintings continue my interest in a three dimensional play with flat, painted then assembled wood shapes; as well as the curious pleasure and ‘odd’ outcome of painting the assemblages onto paper.

What was flat became form, what was form became flat…

This process of painting my artworks: a re-iteration, a re-presentation and a re-thinking of originally made forms, means a heightened level of interplay between flat paint, flat paper as well as real and illusory structures in my practice.” 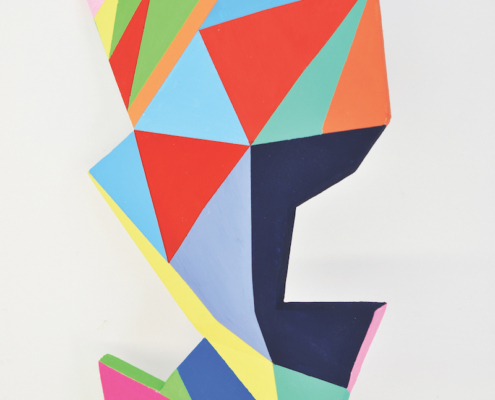